The Jewish Studies Program takes an interdisciplinary approach to examining the many facets of Jewish civilization – including its history, religion, politics, and literature – from its ancient origins through present times in both Western and non-Western societies.

Students concentrating in Jewish Studies may take courses in the departments of history, government & law, religious studies, foreign languages and other disciplines. 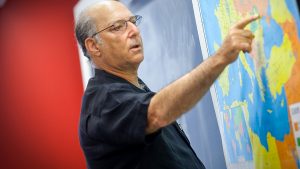 Robert I. Weiner, Jones Professor of History taught a class entitled “A Perfect Storm, What Made the Holocaust Possible?” (Part I and II) during Alumni Summer College.

Lafayette College offers a minor in Jewish Studies. In addition, interested students are encouraged to go beyond the minor and design a major in Jewish studies that may include independent study work and a senior thesis. Students also may supplement studies at Lafayette with courses offered by other institutions in the US (including Lehigh University’s Philip and Muriel Berman Center for Jewish Studies) and other countries including Israel.

The minor in Jewish Studies consists of five approved courses in both the humanities and social sciences from at least three departments. No more than two courses in Hebrew may be applied toward the minor requirements, both of which must be intermediate level. All students enrolled in the minor must take Religious Studies 213: Judaism.

Courses should be chosen in consultation with Professor Ilan Peleg, Jewish Studies chair, from the following list and from special courses offered in cooperation with the Philip and Muriel Berman Center for Jewish Studies at Lehigh:

More detailed descriptions of these courses can be found in the Lafayette College Catalog.

Our Pulse Our People